Kozy Korpesh - Bayan Sulu - Kazakh lyric-epic poem XIII - XIV centuries, written in the middle of the XIX century. The poem was known in oral versions by "akyns" ( kazakh singing tellers) Sybanbay, Bekbay, Zhanak, Shozhe. It's the about 20 variants and the most famous version is Zhanak's. The written version of the most common version, recorded by folklore collectors Sablukov (1831), G. Derbisalin (1834), A. Frolov (1841), Chokan Valikhanov (1856). In Russian poem was published by M. Putintsev in 1865, then it was included in the third volume of the collection W.Radloff "Samples of folk literature of Turkic tribes' 1870
Plot

An old legend about the tragic love Kozy Korpesh and Bayan Sulu says, some friends from childhood Sarybai and Karabai vowed to marry their children, which even before the birth of the hoop. Without waiting for the birth of his son, Sarybai dies while hunting . Younger Kozy and Bayan, have not seen each other yet , but linked fately bonds of the marriage contract, finally fell in love. Time passes and Karabai changes life plans. He promises to give his daughter to the local paluan( warrior) Kodar, who saved one of his flock from dzhut( starvation and mass death of livestock). Kodar becomes a barrier between the lovers. In this eternal triangle of the first folded violent head Kozy. Saddened Bayan to avenge the killer, she resorted to trickery. She promises to marry Kodar, if he will dig for it well with spring water. Kodar gets to work, all venturing holding long braids Bayan. She suddenly cuts off the spit: Kodar left in the well die. Thus Kozy avenged. On his grave legend heroine stabs herself with a dagger. 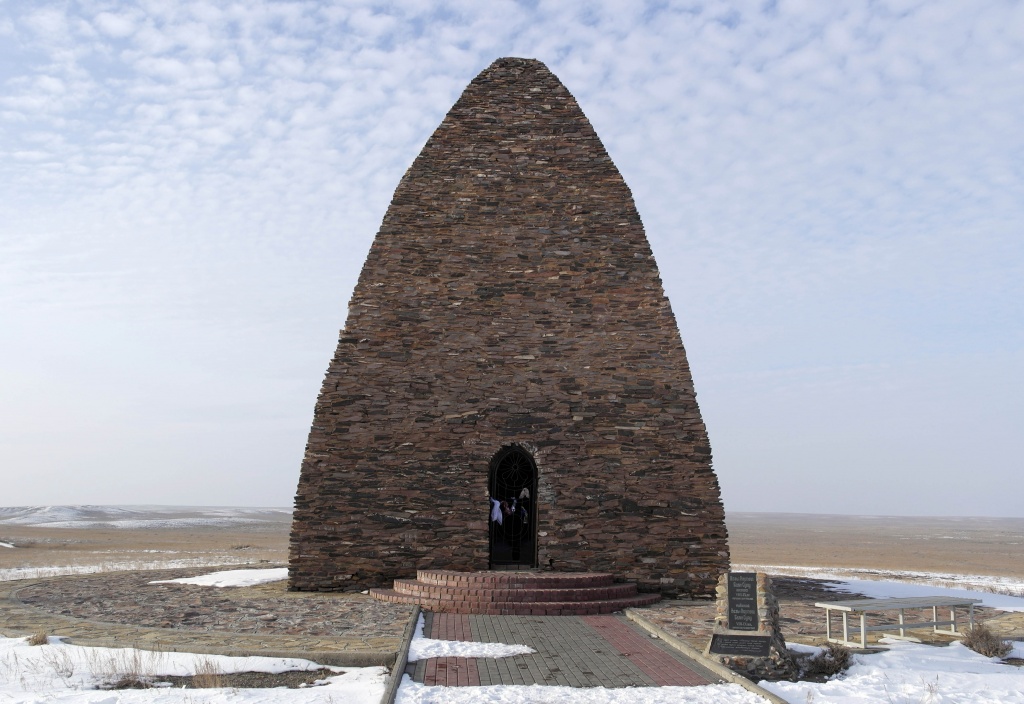 The poem "Kozy Korpesh - Bayan Sulu" interested in Pushkin during his visit to Orenburg in order to collect information about the peasant uprising led by Emelyan Pugachev for "Stories of Pugachev rebellion" and the novel "The Captain's Daughter." Subsequently, in his archives discovered the poem, its text was published in 1837 in the "Bulletin of the Pushkin Commission". Record five sheets made by hand of an unknown man. Pushkin's record a little at odds with the more common version. Local historian from Uralsk city Nikolay Chesnokov argues that the poem recorded by Yaik Cossack, who owned the Kazakh language. However, it is likely that a poem were written by Kazakh people from Bokey Horde, which well knew Russian language to the great Russian poet. It has been suggested that on the basis of "Kozy Korpesh - Bayan Sulu" Pushkin intended to write his own poem, but his early death prevented.

The poem was highly praised by Castanet S. A., N.A. Abramov and other scientists. In prose exposition in Russian folklore poem published by N.N. Pantusov, R. S. Abdurakhmanov, E.Z. Baranov. Its first translation into Russian, which were published in 1928, 1941 and 1949, was made by Russian poet G.N. Tveritinov. In the Soviet period M.O. Auezov issued version of Zhanak in the beginning of 1925 in Moscow, then in 1936 in Alma-Ata . The historical significance of the poem studied by Gabdullin M., I. Duisenbaev, A. Konyratbaev. According to them the names of specific areas of the rivers (Ayaguz, Urzhar, Lepsy, Kalba) indicate the actual historical conditions of formation of the epic. In the East Kazakhstan region in the area near the station Ayaguz Tansyk there is a monument, which is called the tomb and of Kozy and Bayan. There are about 20 variants of this poem

In the folklore of some Turkic peoples, there are other versions of the poem. For example, the Bashkirs it is called "Cuza Kurpesh menen Mayan hylu", in Tatars - "Kuzy Korpesh", in Altai - "Cozy Erkesh"

On the basis of the poem were created the piece-play of G. M. Musrepov "Kozy Korpesh - Bayan Sulu".Which premier was today on 29 th of April in 1940. Exactly 73 years ago. The movie called "Poem of Love" was produced and presented in 1954, according to the scenario of Musrepov. In 1992, the well-known Kazakh film director and actor Asanali Ashimov shot film "Kozy Korpesh - Bayan Sulu".