One of the most significant works of the prominent Qazaq writer Sabit Mukanov is the novel ‘The Fair Love’. 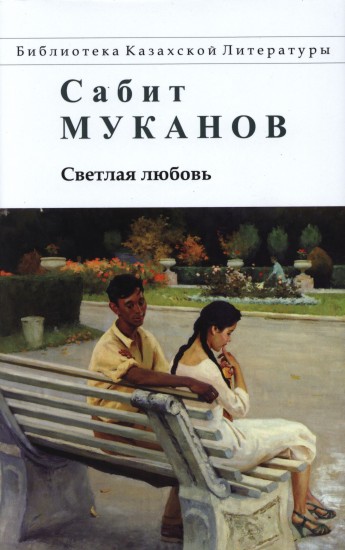 The plot of the novel ‘The Fair Love’, at first glance, is quite traditional: two lovers - a young man Burkut, a girl Bates - enter into an unequal struggle with those who put obstacles them, encroach on their rights for love. This struggle takes the character of a universal struggle for individual freedom, the right of free choice.

High and mighty defend their right to rule powerless people. Burkut’s father, who is the main opponent of the new system is described very brightly. Scenes of a merciless and brutal fight between a father and a son are depicted colorfully on the pages of the novel. Bates’s struggle for her freedom has also been violent and tragic. However, the main attention of the readers is not focused on that fight. The lyrically touching and at the same time dramatically sad story of love of the young man Burkut and the girl Bates is a key plotline of the novel.

The writer embodied in them the best features of their generation: the desire for knowledge, for inner harmony, self-respect, the ability to defend his or her right, determination, intolerance to falsehood.

Burkut and Bates personify a new generation of young people who embody the future of the Qazaq people. The integrity of nature and dedication, beauty and wealth of the inner world, determination in their actions, intolerance to evil, lawlessness, injustice and cruelty distinguish them. The writer put a lot of effort on creation of the images of lovers.

The real story that occurred on April 2, 1928 in the city of Kyzyl-Orda gave an impetus for writing this work. The writer accidentally witnessed the tragic event - the murder of a man. ‘When I approached the victim, it turned out that I knew him. It was Mustafa Koshekov, an employee of the ‘Enbekshi Qazaq’ newspaper! The victim and the killer were cousins!’. As a result of this event, the writer had an inner need to express his emotions. In order to thoroughly study the basis of the future work, Sabit Mukanov asked appropriate people to appoint him as a public prosecutor in court of Sultanbek Abeuov, who killed the man. Immediately after the bloody events, he met with Batima Makasheva, the prototype of the image of Bates and Sultanbek Abeuov, who had already been imprisoned.

Initially, Sabit Mukanov called his work ‘Gone Astray’. He began writing it in Kzyl-Orda, immediately following the events and the first version of the novel was completed in Leningrad (now in Saint-Petersburg) at the end of 1928.

The novel in the political environment of the 30s was criticized as inappropriate to the spirit of the times. Later the author returned to the novel and reworked it and published it under a different name - ‘The Fair Love’.

In the novel ‘The Fair Love’ the vital material that served as its basis had been radically reworked, enriched by the imagination of the writer, who openly expresses his point of view on the life and fate of the heroes.

Sabit Mukanov’s novel ‘The Fair Love’ is written in the form of memories of the heroes of the novel. The work is full of bright colors. The writer describes in detail the history of the place where the events took place, gives insight on the customs and traditions of the Qazaq people.

Readers are attracted by the masterful construction of the plot, the ability to weave real situations into it, the description of the inner world of the characters.

Usually, the writer shows himself in literature as a representative of a particular genre - poetry, fiction, historical novel, biography or journalism. This cannot be said about Sabit Mukanov, whose work is at the origin of all the above-mentioned genres of Qazaq literature.

Sabit Mukanov wrote: ‘The place where I was born and brought up is called Zhamanshubar. There was an endless wide steppe. The rich greenery of grass and tress grew at that place’. Later, in his trilogy ‘The School of Life’, he tells in detail about his family, the place where he was born.

He describes with bright colors nature, sunrise, the sky, Lake ‘Dos’, near which there was a place called Zhamanshubar (now the village of Dokuchaevo, Zhambyl district of North Qazaqstan region).

Sabit Mukanov loved the place where he was born and grew up and from his childhood he cherished those memories. It was a source of inspiration for him. He was orphaned early and that is why knew what was the need.

In spite of the fact that his parents’ relatives gave shelter to him and his sister, he had to work as a slave for the rich people of the village.

He learned to read and write from the mullah, and from the age of 15, under the influence of the creative work of folk akyns (traditional Qazaq poet-singers) and a collection of poems of a great Qazaq writer Abai, he began to compose his first poems. He inherited the gift of songs from his parents, and possessing an excellent memory for learning sayings, fairy tales and poems, he often took part in aytys (song-competitions), improvised and composed funny, humorous versus.

When the October Revolution came Sabit Mukanov was a teenager, he took part actively in the events. In 1919, he completed a teacher’s course in the city of Omsk, at the same time he worked as a secretary of the famous Qazaq writer Magzhan Zhumabayev. In the early 20s of the last century, Sabit Mukanov participated in the Civil war. It was during these years that he began consciously to think of being a poet.

While studying at the workers' school in Orenburg, he met and made friends with another eminent Qazaq writer Saken Seifullin, who helped him to become a professional writer. At the age of 25 he acted as an editor of regional newspapers and magazines. Later on, he was appointed as an Executive secretary of the newspapers ‘Bostandyk Tuy’ (‘A Flag of Freedom’) and ‘Kenes auly’ (‘The Village Council’), published in Petropavlovsk.

Sabit Mukanov had a wide range of writing skills, he could write a poetry, a prose, a drama. His creative legacy is dozens of novels and short stories, hundreds of poems and poems, numerous essays and short stories, more than two hundred literary-critical articles. His works have been translated into many languages of the world.

Similar articles
#ESSAY
Women in poetry of Qazaqstan
2251
#ESSAY
About a novel 'The End of the Legend' of a renowned Qazaq writer Abish Kekilbaev
2220
#ESSAY
A book «The Man-Deer and Other Stories», written by Oralkhan Bokeev is available for anglophone readers
2265