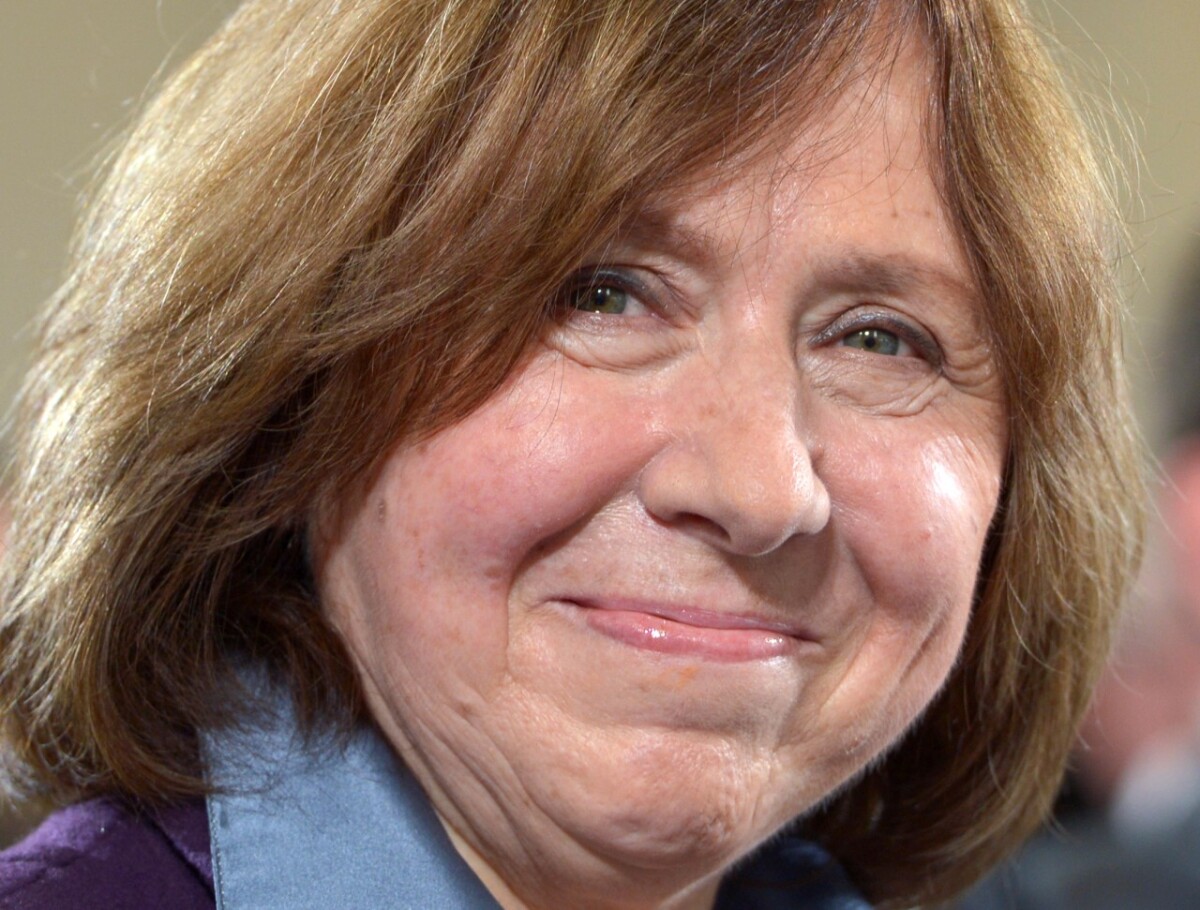 Excerpt from Voices from Chernobyl

There was a black cloud, and hard rain. The puddles were yellow and green, like someone had poured paint into them. They said it was dust from the flowers. Grandma made us stay in the cellar. She got down on her knees and prayed. And she taught us, too. "Pray! It's the end of the world. It's God's punishment for our sins." My brother was eight and I was six. We started remembering our sins. He broke the glass can with the raspberry jam, and I didn't tell my mom that I'd got my new dress caught on a fence and it ripped. I hid it in the closet.

*
Soldiers came for us in cars. I thought the war had started. They were saying these things: "deactivation," "isotopes." One soldier was chasing after a cat. The dosimeter was working on the cat like an automatic: click, click. A boy and a girl were chasing the cat, too. The boy was all right, but the girl kept crying, "I won't give him up!" She was yelling: "Run away, run little girl!" But the soldier had a big plastic bag.

*
I heard - the adults were talking - Grandma was crying - since the year I was born [1986], there haven't been any boys or girls born in our village. I'm the only one. The doctors said I couldn't be born. But my mom ran away from the hospital and hid at Grandma's. So I was born at Grandma's. I heard them talking about it.

I don't have a brother or sister. I want one.

Tell me, lady, how could it be that I wouldn't be born? Where would I be? High in the sky? On another planet?

*
The sparrows disappeared from our town in the first year after the accident. They were lying around everywhere - in the yards, on the asphalt. They'd be raked up and taken away in the containers with the leaves. They didn't let people burn the leaves that year, because they were radioactive, so they buried the leaves.

The sparrows came back two years later. We were so happy, we were calling to each other: "I saw a sparrow yesterday! They're back."

The May bugs also disappeared, and they haven't come back. Maybe they'll come back in a hundred years or a thousand. That's what our teacher says. I won't see them.

*
September first, the first day of school, and there wasn't a single flower. The flowers were radioactive. Before the beginning of the year, the people working weren't masons, like before, but soldiers. They mowed the flowers, took off the earth and took it away somewhere in cars with trailers.

In a year they evacuated all of us and buried the village. My father's a cab driver, he drove there and told us about it. First they'd tear a big pit in the ground, five meters deep. Then the firemen would come up and use their hoses to wash the house from its roof to its foundation, so that no radioactive dust gets kicked up. They wash the windows, the roof, the door, all of it. Then a crane drags the house from its spot and puts it down into the pit. There's dolls and books and cans all scattered around. The excavator picks them up. Then it covers everything with sand and clay, leveling it. And then instead of a village, you have an empty field. They sowed our land with corn. Our house is lying there, and our school and our village council office. My plants are there and two albums of stamps, I was hoping to bring them with me. Also I had a bike.

*
I'm twelve years old and I'm an invalid. The mailman brings two pension checks to our house - for me and my granddad. When the girls in my class found out that I had cancer of the blood, they were afraid to sit next to me. They didn't want to touch me.

The doctors said that I got sick because my father worked at Chernobyl. And after that I was born. I love my father.

*
They came for my father at night. I didn't hear how he got packed, I was asleep. In the morning I saw my mother was crying. She said, "Papa's in Chernobyl now."

We waited for him like he was at the war.

He came back and started going to the factory again. He didn't tell us anything. At school I bragged to everyone that my father just came back from Chernobyl, that he was a liquidator, and the liquidators were the ones who helped clean up after the accident. They were heroes. All the boys were jealous.

A year later he got sick.

We walked around in the hospital courtyard - this was after his second operation - and that was the first time he told me about Chernobyl.

They worked pretty close to the reactor. It was quiet and peaceful and pretty, he said. And as they're working, things are happening. The gardens are blooming. For who? The people have left the villages. They "cleaned" the things that needed to be left behind. They took off the topsoil that had been contaminated by cesium and strontium, and they washed the roofs. The next day everything would be "clicking" on the dosimeters again.

"In parting they shook our hands and gave us certificates of gratitude for our self-sacrifice." He talked and talked. The last time he came back from the hospital, he said: "If I stay alive, no more physics or chemistry for me. I'll leave the factory. I'll become a shepherd." My mom and I are alone now. I won't go to the technical institute, even though she wants me to. That's where my dad went.

*
I used to write poems. I was in love with a girl. In fifth grade. In seventh grade I found out about death.

I read in Garcia Lorca: "the cry's black root." I began to learn how to fly. I don't like playing that game, but what can you do?

I had a friend, Andrei. They did two operations on him and then sent him home. Six months later he was supposed to get a third operation. He hanged himself from his belt, in an empty classroom, when everyone else had gone to gym glass. The doctors had said he wasn't allowed to run or jump.

Yulia, Katya, Vadim, Oksana, Oleg, and now Andrei. "We'll die, and then we'll become science," Andrei used to say. "We'll die and everyone will forget us," Katya said. "When I die, don't bury me at the cemetery, I'm afraid of the cemetery, there are only dead people and crows there," said Oksana. "Bury me in the field." Yulia used to just cry. The whole sky is alive for me now when I look at it, because they're all there.