Home LITERARY PROCESS ALL The girl in whom the poet Zhumeken Nazhmidenov was...

The girl in whom the poet Zhumeken Nazhmidenov was in love, who is she? 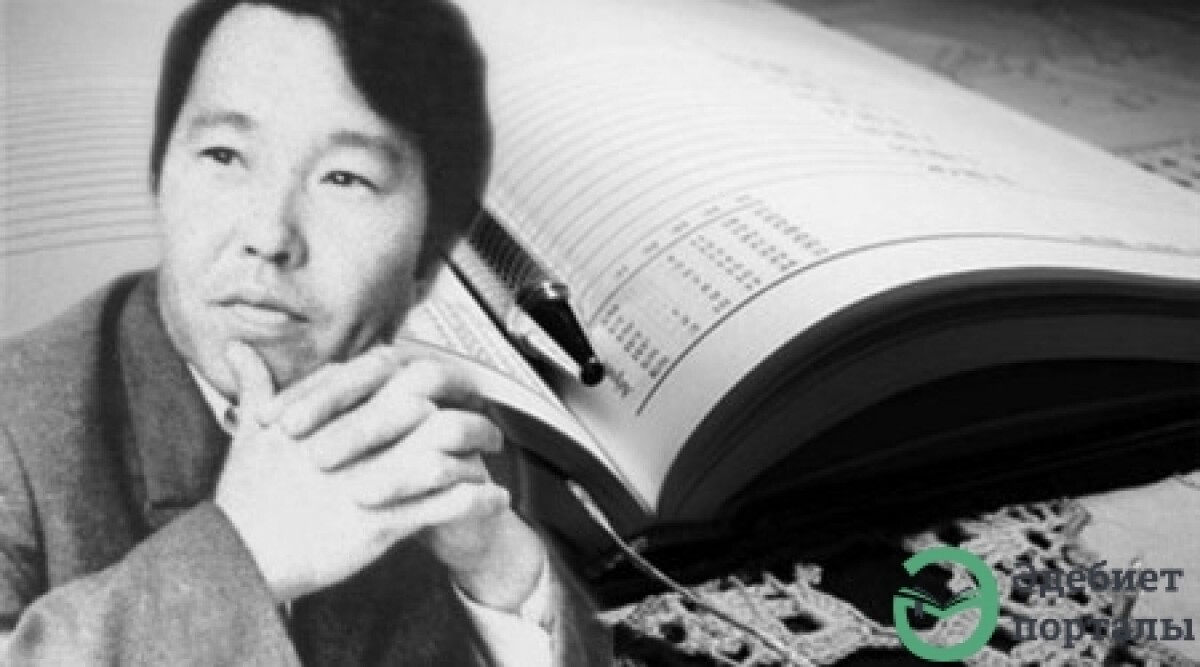 So who is the girl in whom the poet Zhumeken Nazhmidenov was in love?

Personally, I do not understand those critics who spend words, talking about what kind of poet Zhumeken Nazhmidenov. Its depth, activity, revived Kazakh poetry, as a new share, a clear picture, like giving a blind cane. After all, this is not only a representation, but a phenomenon. Kazakh critics should stop evaluating the work of poets and writers in general. It will be unfair before conscience, weakness before literature. Relatively, the poet can have both quality and not high-quality verses. Even a work is not always written on the same topic.

A poet Kadir Mirza Ali said about Zhumeken the following: "All my life I recognized him. And now for me one of the strongest poets is Zhumeken Nazhmidenov. Even when he began to write lyric poetry in his youth, he thought "how Jumeken will look at it." How did the poet Zhumeken look at the gentle poems that play on the string of feelings and on the works showing a hint of falling in love? Several years ago, one critic praised that "Zhumeken - poet intelligence. He does not fool his head into trifles, does not write poetry, taking care of personal gain. Constantly starts topics about the people." I do not agree with this opinion. The poet touched almost all the problems concerning humanity. And to distinguish their fineness and scale, it is probably our task.

And now, at what level is it better to consider the sign of feelings between a guy and a girl? Obviously, this does not carry the burden of the people's problem. The inner struggle of the personality takes the form of chaos, you lose count, the moments when you obey the desire of the heart, is found in everyone, from the child to the sage. Feeling does not obey neither time nor dimension.

What is sweeter than this in the world?

What is hotter than this in the world?

Sweetness: do not dare look into her eyes directly,

Bitter: in that she has a strict mother.

In the poem there are five or six trivial themes, which poets do not step over, to which both the foot and the poet's pen should touch. The above-mentioned concepts consist of common objects that have a direct relationship to human life. In the process of reading, when the reader sees his life in a poem, he regrets saying these words: "oh, what else can be said better than this?". He begins to believe a person under the name of a poet. Power in the category of unity of the poem begins with the environment of these themes. Because, a phenomenon belonging to a person does not have a face, a difference, a mark. For example, how intelligent the one who loves his homeland is, so stupid can feel it. Also in poetry, the bulk of the sung and convincing poems, turned into the dogma of numerous readers, are love works. It is enough to take, for example, that near the black-eyed, who has both beauty and a birthmark, both the classical poet and his successors are expanding. Kazakh poets in recognition of feelings cannot refuse, do not hesitate the girls who hit them in the eye. "He foolishly said what he wanted." Even in the strictest regime there were no restrictions on this topic. Sam Atambemberi, who praised heroism and pride, said his opinion openly:

Even for not capable of rivalry in his youth and purity woman Magzhan Zhumabaev dreamed: "Let the sun laughs in the sky, and laughs only Gulsum!". It will be in harmony if you say an excuse that I forgot "about Kasym, Tolegen, Mukagali and someone else who surpassed them." A long rhythm, shortness of thought: Kazakh poets compared their muses, to whom they were in love, with everyone, from the sun to the flowers. The truth is, there is absolutely nothing left between these two natures. Now include advertising Jumeken Najmidenov on Indian tea. Who knew that some tea can be so tasty? The poet elegantly used the epithet "Girl, pouring tea" in the form of literary criticism, which was determined by Ahmet. The skill of the poet is that he did not store his feelings in himself, in order to express it through poems, he made a composition structure. The thread of the event explores all your imagination, as in prose. From the poetic image, you cannot get rid of only by looking through your eyes, and you feel with your heart. The work and from the moral point of view leads to great concepts. Informs about the hospitality of the Kazakhs, about the subjects that take place at the table. Long ago, in this steppe, everything was decided at the table, ranging from small cases to the problems of the people. If this poem was written by European poets, then the name would change to "The Girl Who Sold Flowers" or Japanese poets would write as "The Girl Who Sold Books", who knows.

All men at the sight of beauties become cowardly, they also have a habit that, with an increase in the severity of the heart, the head bends lower and lower. This feeling, mostly, is characteristic of young love. "The first love begins with school" confirms our word. Maybe all the dreams of adults about school times are reborn with the idea that they want to regain past feelings. But, if, based on the poems of Zhumeken Nazhmidenov, such a feeling occurs at the age of the top, that is, at thirty. The essence of the simple principle of "beauty saves the world" also left from here.

The poet Jumeken does not have an unruffled opinion. Comparatively, he produced works that convinced and proved to the reader his judgments. He is a true master of contrasting depiction of the fine arts. (In fact, is the poem an image?). A known method of "sweets - as the true bitterness - as inspiration, ease - as foam, gravity - like a coffin" will make our word more expensive.

We were pleased with the sweetness of "Tea, poured by a girl". Now we have to puzzle over the question of what is his "bitterness". The poet considers the severity of the mother "bitter."

And her father's fate, she also made strict

Would know if, you, my friend is tasty to many

In the concept of Kazakhs the image of the future husband of a girl is formed around the image of the father. For the Kazakh girl the word father is an ideal. All her pride is stored around her father's expression. About this Kazakh wisdom summed up only one word "girl ban in forty houses." Zhumeken Nazhmidenov deeply touches this topic. Apart from his father and mother, he still includes his grandmother, as the guardian of this girl. This is one of those factors that show that three generations live in peace and harmony around one hearth.

A little regret you will offer me, unfolding a cup,

Sitting just you are embarrassed only innocently unbuttoned.

Inflection, a heavy sin is not forgivable, perhaps.

Grandmother was indecently given her by fate,

Not counting the handkerchief is white; it is like a stake, not a wife.

Here the covered dastarkhan - like a deep blue sea,

In the blue sea as a beacon, four eyes caught fire soon;

Two of them - on the ground sitting, a modest girl herself,

Two of them - sitting in the place of honor of the guest's eyes!

As quoted in the poem, a man in love has much suffering, a serious sin, and he is always sad. The longing of a lover - to be purified, to get rid of sinful thoughts. A person with such feelings looks at life one head above the others. The glow of the eyes of a guy and a girl at the table indicates a passionate desire for existence. And so, behind this table there were many other eyes. They are not clearly visible in the poem, because they were covered by light, the energy of loving eyes.

This poem by Zhumeken Nazhmidenov describes the feeling as it is without unnecessary words. Even his lyrics are formed on the account. Maybe there are those who say that "there are not enough lyrics in the poem." Because, our lyrical poems are written with arrogant pathos, a conversation with heavenly bodies. And Jumeken obeys the mind more than imagination. He inspires confidence that he does not include unnecessary pictures.

It's more interesting to look at a girl,

But to track down - a little harder,

It would be better to disperse to us without getting sick

As the poet himself said, this poem "provoked us, breaking our sleep."

That can be bitter, do not know,

Tea filled with a girl -

That can be sweeter, I do not know.

Bitter - too early I got the role of a father,

The sweetness is in the dream that I'm on shore for a month.

The poet feels his responsibility that he became a father. Not what he feels, he openly talks about it. We have a man who became a grandfather, not hesitating to show the poetry to a girl who suits her granddaughter, and there will be those who equate this with the lyrics, with the character of the poet. And, at the end of the poem, he sums up "sweetness - in the dream that I'm ashore of the month."There would have been another poet in his place, with the inertia of emotion he would have written "sweetness - in the dream that I've been ashore all my life." The poet Jumeken makes him his muse, and understands that he will remember her only for months. Then there is no point in thinking about her. Because, in addition to the poem, there is a real life…