Home LITERARY PROCESS LITERARY NEWS Dedicated to one hundred and tenth anniversary of ... 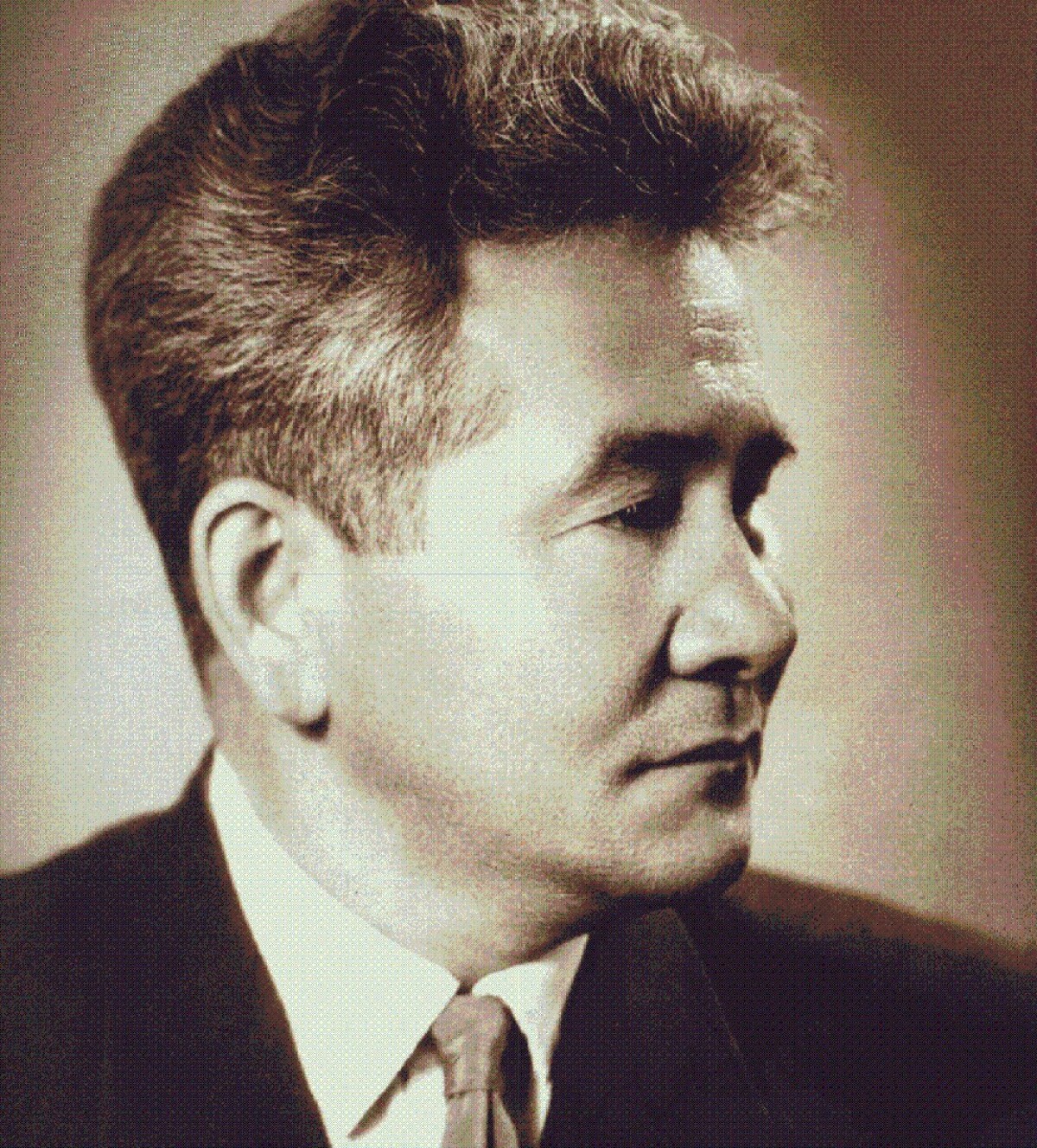 Dedicated to one hundred and tenth anniversary of the birth of the great and wonderful man, great talented person Ahmet  Zhubanov.

For me as a person who belongs to Kazakh culture, talk about Akhmet Zhubanov - is a difficult and responsible task. Do not leave the fear that, contrary to appearances, we are still not fully aware of his importance for our culture. 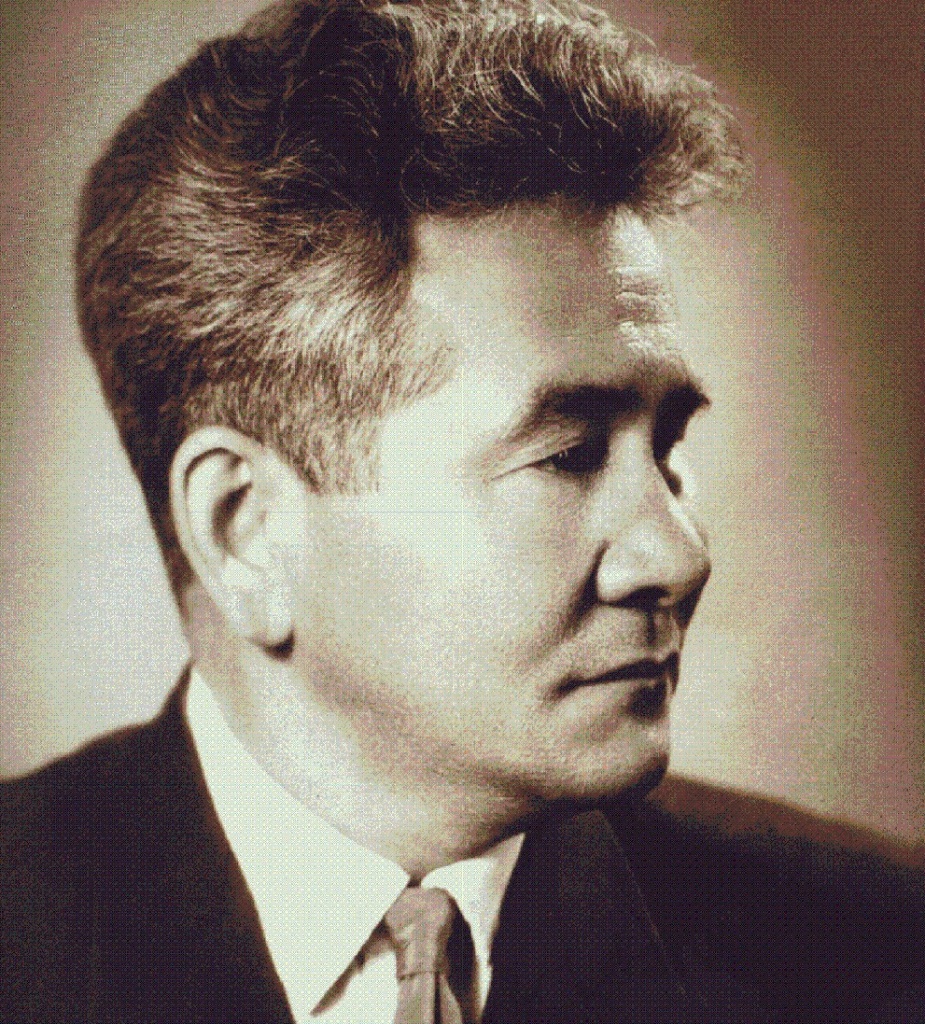 In 1932 he graduated from the historical and theoretical faculty of Leningrad Conservatory.

In 1934 he created the Orchestra named after Kurmangazy and was its Head-Lieder Conductor until 1945. 1935-1937 - artistic director of the Philharmonic named after Jambul.

From 1961 he headed the Department of Musical Arts Institute of Literature and Art named after  Auezov.

The author of books, essays and articles on Kazakh folk music.

Composer Ahmet Kuanovich Zhubanov - an original artist and a bright national. He worked his way up to the academician, People's Artist of the Kazakh SSR. "In the barren "takyr"(desolate place in desert) and a blade of grass will not grow" - say Kazakhs. These words can be fully attributed to the professional music, which is born and develops in the folk's soil. 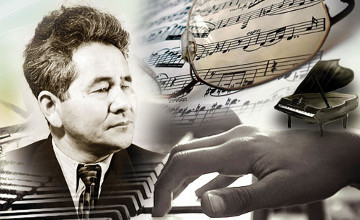 Father of the future composer Kuan was an enlightened man in the village. In addition, communicating with Russian peasants of the Voronezh, Kursk, Tambov, Kharkov, which since 1870 began to settle for permanent residence under the Aktobe, he learned to speak and read in Russian. Father of Zhubanov dreamed to educate their children. A lot of effort has been applied to them to open a school in his village, where he took seven years Ahmet. In 1918 Zhubanov ends two-year Russian school in Zhuryn and then, after completing a study on teacher training courses, works in the city of Temir. But for a moment the young man does not forget about the music, on his own tries to study the theory and musical instrument grammar, plays in the amateur orchestra of folk instruments.

Years spent by Zhubanov in Aktyubinsk, have been particularly important in his life. Here he learns to play the violin at the music teacher exiled from Voskresensk Peter Georgiyevich Chernyuk.

Zhubanov was much impressed when Alexey Vasilievich Zataevich's "1000 songs of the Kazakh people" book published   . "I learned many kinds of legends about the songs collected by Zataevich, and a man who knew how to read these, pretending like mouse trails, tracing the sounds and lights up the desire to become as expert in the field of music as Zataevich. And Chernyuk warmly and sincerely support this is my desire. My correspondence acquaintance with Alexey Vasilievich Zataevich through his collection of Kazakh songs ninety percent decided the direction of my future destiny "- the composer later recalled.

In 1928, Ahmet became student of musical college named after Glinka in Leningrad, where he engaged in violin from an experienced teacher A. A. Etigon. The time of intensive study begins, but the young man was not limited to the program of secondary school, he was doing a lot of effort in order to enter the conservatory.

Within the walls of the college Ahmet acquainted with the works of Russian (Myaskovsky, Asafiev and others) and foreign classics. Subsequently, a talented musician enroll in the Leningrad Conservatory in class of oboe. 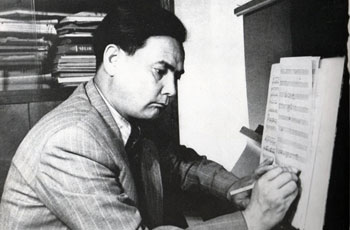 In 1932 Zhubanov becomes a graduate student of the Academy of Arts in Leningrad, and a year later the People's Commissariat of Kazakhstan was recalled him to work in Alma-Ata. All his subsequent creative life was closely connected with the origin, formation and development of new forms of musical culture in Kazakhstan. The organizational and pedagogical activity of Zhubanov started in the 30s, when opened the first musical institution in the country - music and drama school. At the initiative of Zhubanov research study was organized by him, as well as an experimental workshop on the improvement of folk instruments. Here for this work had been invited   Brusilovskiy E. from Leningrad, L. Mukhitov from the Ural region, M. Bukeikhanov from Kyzyl-Orda, masters for the production of musical instruments brothers Romanenko and others .

When college student Zhubanov created ensemble of dombra players, which at first All Kazahstan rally of  popular talents in 1934 demonstrated his art. Soon Presidium of Kazakh Central Executive Committee adopted a decree on the establishment on the basis of an ensemble of dombra players of the orchestra of the Kazakh national instruments. Thus how was born the world-famous Kazakh State Orchestra of Folk Instruments named after Kurmangazy, Head-Lieder Conductor and artistic director was appointed Ahmet Zhubanov.

An important aspect of fruitful activity of Zhubanov - its organizational work on the preparation of national cadres. For many years he headed the department of Kazakh folk instruments of Alma-Ata State Conservatory, where he developed a special course on the history of Kazakh folk music. Many of the pupils are now well-known musicians Ahmet Zhubanov. They are Nurgisa Tlendiyev, Shamgon Kazhgaliyev, Rustembek Omarov and others.

Scientific research, musical and social, pedagogical activity Zhubanov successfully combined with active creativity, making a great contribution to the Kazakh professional music. He is the author of many works of various genres, have been granted recognition of the people. Among them, symphonic works and opera, chamber music and choral works, songs and romances, music to drama performances and films. A work as composer Ahmet Zhubanov engaged since 1938.

The young composer is not limited to the processing of Kazakh folk songs. He shifted to the orchestra of Kazakh folk instruments works of Russian and foreign classical composers. In 1943, the Kazakh folk instruments orchestra played a march Chernomor from Glinka's opera "Ruslan and Lyudmila", "Moment Musical" by Schubert in instrumentation by Zhubanov. Later on were created the orchestration fragments  from Tchaikovsky's opera "Queen of Spades" by Rimsky-Korsakov's "The Tsar's Bride", "Prelude" and "Crimean sketches" of Spendiyarov. Zhubanov transcribed for orchestra and instrumental compositions, songs and choruses of Koval, Pokrass, Chishko, Revutskiy and other Russian and Ukrainian composers of the Soviet period. All this contributed to the increase and improvement of masters of the orchestra musicians. Further growth of the team, wide promotion of creativity classical composers are inseparable from the activities and experiences of Zhubanov. His traditions have become an example for future generations of composers and conductors.

Composing activities of Zhubanov in 1938-40 years has developed in two directions - he was involved in the processing of folk songs and "kyuis"(Kazakh national music compositions) and wrote his own works. In 1939 he created the music for the piece-play of G. M. Musrepov "Kozy-Korpesh - Bayan Sulu". Together with the composer M. F. Gnesin worked on the music for the film "Amangeldy". Then he composes music to drama performances of M. Akynzhanov "Isatai-Makhambet", M. O. Auezov's "Abai". One of the most significant works of these years - a piece-music "Sarah," about the life and works of the national composer.

By writing a large musical compositions Zhubanov come already with a great artistic heritage and borrowed from the treasury of the national heritage of those works which, in his opinion, the most successful were heard in the orchestra, without losing their color. So music written to the tragedy "Abai" by Mukhtar Auezov, symphonic poem "Abay" were a preparatory step to writing an opera on this subject. Opera "Abay", written by Zhubanov in creative collaboration with composer Latif Hamidi in 1944, was the first attempt at writing in this genre. Opera "Abay", written for the 100th anniversary of Abay and dedicated to the 10th anniversary of the opening of the Kazakh Theater of Opera and Ballet, became a new word in the Kazakh music.

Suffice it to only try to imagine the creative life of Ahmet Zhubanov as involuntarily covers his wonder at the enormous capacity for work and diligence. He has written hundreds of research papers, articles and artistic essays on national music culture. Such works Zhubanov as "Strings of centuries", "Nightingales centuries", "Kurmangazy", "Life and Work of Kazakh folk composers," "Music culture of Kazakh people", "An kui Sapar" ( "Journey through songs and kazakh national compositions") can be found in the home library of any researcher interested in the question of folk music. Zhubanov Proceedings have long since become an indispensable source for literary work. Ahmet Zhubanov, jealously guard the legacy of folk music until the  last day of his geourgeous life even for a moment could not stop thinking about her fate, the fate of the music, which has become the ideal of his life. He was buried at the central cemetery of the city of Alma-Ata. 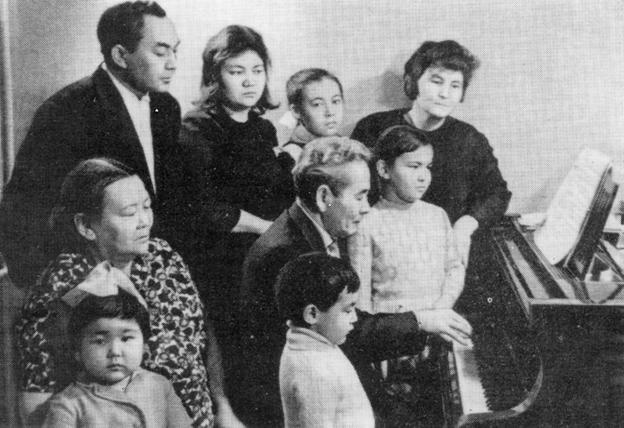 In honor Zhubanov A. K. in Kazakhstan were issued a postage stamp and commemorative coin.

According to the decision of UNESCO 2006 was declared the year of Ahmet Zhubanov, and on October 17 at UNESCO headquarters in Paris, the gala evening with the participation of leading masters of arts of Kazakhstan. 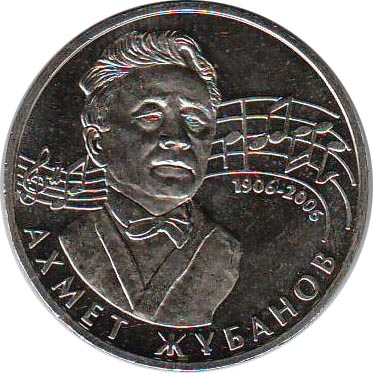 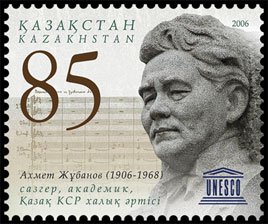 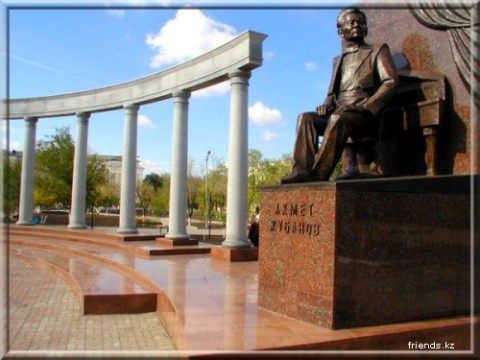 People's Artist of the Kazakh SSR.

Laureate of the State Prize.

For the book "Nightingales centuries" was awarded the Prize. Ch.Valikhanov KazSSR.

1941 - Abay poem (also for the orchestra of Kazakh folk instruments)

1945 - Kazakh instruments for the orchestra - 4 suites

1945 - Suite (singing) on the themes of Kazakh folk songs

For violin and piano or kobyz

For kobyz and Piano

For voice and fortepiano

music for film and theater

On the question of the origin of the Kazakh musical genre kui. Historical and linguistic essay. Kyzyl-Orda, 1936;

Life and Work of Kazakh folk composers of the XIX beginning of XX century. (In Kazakh. Lang.). Alma-Ata, 1950;