Home Literary process Sabit Dossanov: “The book helps us to live as a human being”

Sabit Dossanov: “The book helps us to live as a human being” 12+

In 2012, Sabit Dossanov's book under a title “The White Aruana” was published. The book included: the novel “The White Aruana”, the story “On the Side of the Road”, a collection of poems “I have a lot of dreams, will I have enough time to fulfill them?”

Mercy and compassion are ethical values that are shaping the history of the people. Thanks to them a human being may save himself or herself as an integrated personality, and make his or her contribution to recreation on the Earth a World of Goodness, Beauty and Justice. Exactly this idea was that writers of all times dreamed about. The Qazaq writer Sabit Dossanov touched upon this topic, too. He was called by the people for his talent as the “cardiograph of human souls”.

On what basis should life be built, especially in transitional periods when established traditions and moral standards are called into question? The issue was crucial for Sabit Dossanov, as a human being and a writer. 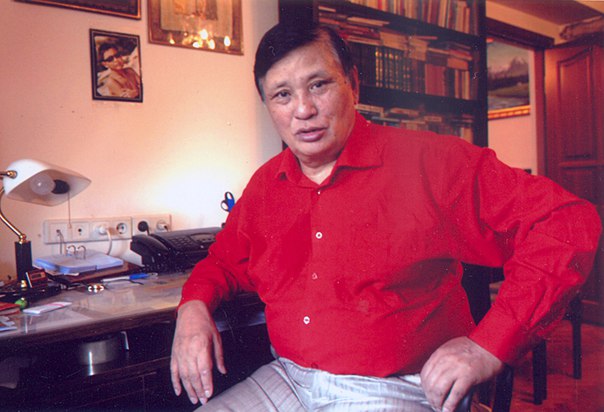 In the story “On the Side of the Road”, the main character is a young man, Aydin, who graduated from the University. He is a talented engineer who lost his job because of downsizing. Aydin lost his beloved wife Rymzhan and son Aybar in a car accident. Aydin, for whom loneliness was worse than poverty, began to communicate with his neighbors as much as possible. But people became more prudent in choosing an interlocutor. So far, only two were willingly talking with Aydin. The first was a retired colonel living in front of his apartment, the second was the owner of the apartment from the floor below, an unemployed journalist.

Aydin accidentally met his old friend Gafur. He had nothing to treat Gafur with except black tea, because Aydin himself forgot when he ate hot food last time. A friend invited him to the capital of Qazaqstan, Nur-Sultan (at that time Astana), but he did not accept his proposal, because he did not want to leave the place where he once felt himself happy.

Aydin’s Tatar neighbor Rafikzhan offered him a job “to bring cars, made abroad” from the United Arab Emirates. Usually that neighbor greeted him with a nod, but that day he was especially polite. Aydin was very happy for a chance to earn money for living. “God has not left me!”, he thought. But on the way back, in Uzbekistan, after Aydin brought the car, his documents were taken from him, and he was left there. Sabit Dossanov writes: “The immensity of human meanness and betrayal shocked him. He felt pain. The pain was burning, infinite, all-encompassing! It pierced him through, burning inside. His eyes darkened, he saw nothing around”. Three months later, Aydin arrived in Almaty without documents. But he found out that his apartment was sold, and the documents were processed in a right way.

Aydin became a homeless man. “The homeless people have their own unwritten laws. Knowing that they would die soon in case of living alone, they try to live in a community. Aydin spent in that den for two more months. He was neither seen nor heard. But the homeless did not accept him and he had to leave that place. When Aydin found a wallet, he did not believe his eyes. But that money was taken from him by cutting his fingers with a blade…”.

It is important to acknowledge that there is no compassion for the homeless in our society. When we see a beggar, we pass by, turning away, keeping a close hand on our wallets, and trying quickly to forget about him. We give them small change or a cigarette. We try to help them and call an ambulance. Having entered the carriage where the homeless sleeps, we pinch our nose and try to take a seat far away from him. If the homeless has settled in our entryway, we call the police. When we see a homeless person, we are overwhelmed by mixed feelings. We feel shame and guilt because we cannot and do not want to help him. We are disgusted and afraid of getting infected from the beggar. We are confused and ask ourselves a question: “how could this happen to him?” Then we feel contempt, we say ourselves: “it is his fault that he has come to such a life!” And after all above mentioned feelings we experience fear, we say to ourselves: “It will never happen to me!”. Therefore, we try not to come across with the unpredictable and frightening reality of the homeless people. We want to forget everything and return to our decent, well-functioning, understandable world.

Sabit Dossanov gives in the story a study touching upon the homeless. He says that: “At present time, there are many homeless people without housing, money for living and job in the country. We cannot say that all people are alcoholics or narcotic addicts. They are excluded from society in connection with the difficult realities of social being. Due to lack of housing, they are forced to live in basements, on roofs and have a miserable existence. Our society lacks social care and compassion for such people”. The theme of compassion and nobility runs throughout the story.

In the story “The White Aruana” people have compassion for the white camel, which escaped from the Dzungar captivity. For two days, a white camel traveled to its Motherland, the Great Steppes of Qazaqstan. The poor camel was tormented by hungry wolves, but a great desire to come back home, “the smell of bitter wormwood” made it to overcome all difficulties. The camel reached its native village.

“Local people looked at the White Aruana with astonishment. The silence in the air was too long. Women had tears in their eyes and men clenched their fists and were very close to lose their temper...”.

Sabit Dossanov is a holder of the Order of Derzhavin for his contribution to literature, for the humanistic orientation of his works. The writing talent of Sabit Dossanov is recognized in Qazaqstan and abroad. Such great representatives of world literature as Sabit Mukanov, Abish Kekilbaev, Olzhas Suleimenov, Gafu Kairbekov, Albert Fisler, Lyudmila Schipakhina, Chingiz Aitmatov, Felix Kuznetsov, Yuri Polyakov and others very much appreciated his works.

Sabit Dossanov used to say: “The book helps us to live as a human being. It educates the soul. Any state could be successful only in case of availability of a healthy in terms of morality human being”.

He began his first steps in literature with poetry. His first writings were published in local journals when he was a student at a secondary school and later on at a University.

In 1958, when he studied at school, his first short story under a title “On a Hayfield” was included in the school textbook “The Mother tongue” for the second-grade students. Moreover, a number of his stories at that time were published in the children's journal “Pioneer”.

The writer’s first book “Good Morning” was published in 1966. Then, in 1968 the book under a title “The Nightingale Trill” (1968) was issued. It included essays, documentaries, novelettes, written on contemporary topics. The collection of short stories “The Eagles Do Not Sleep”, published in 1971, became the biggest achievement of the writer. His novel “The White Aruana” was issued for the first time in this collection.

Sabit Dossanov worked also in the genre of literary criticism. In 1970, the monograph “Fresh Traces” was published as a separate book, in 1987 a book under a title “Treasures”, in 1989 a book under a title “Do Not Extinguish the Fire in Your Heart”, raising acute problems of literature and theatrical art were issued.

His writings have been translated into many foreign languages.