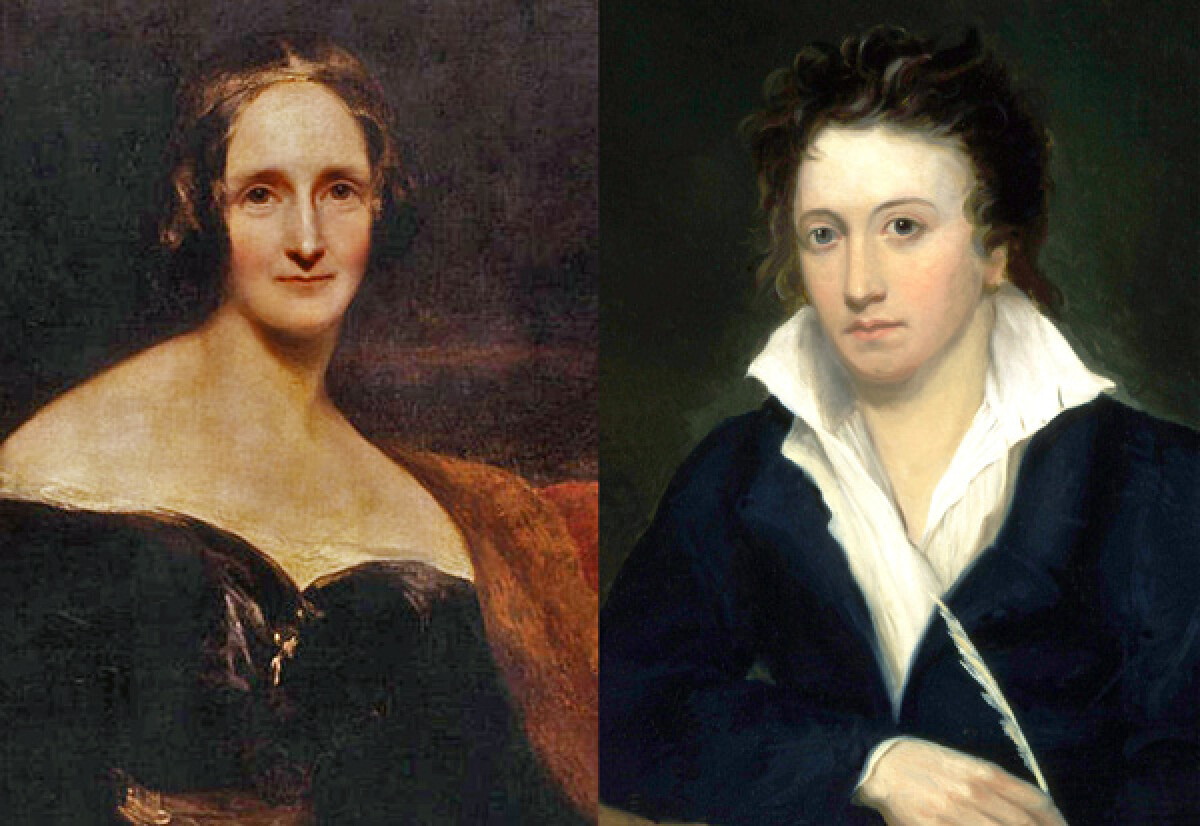 Ten women who have found in family life not only human support, but also creative.

The statement that behind any great man there is a great woman, in relation to writers isn't deprived of sense. Examples are opposite when behind the great woman there is not a great housemaid (as the Italian telecomedian and the writer Luciana Litizetto assures), nevertheless the great man, it is necessary to recognize, yet aren't so numerous. But exist. There are ten famous writers who managed to speak long enough with partners in life not only on household, but also on creative subjects. 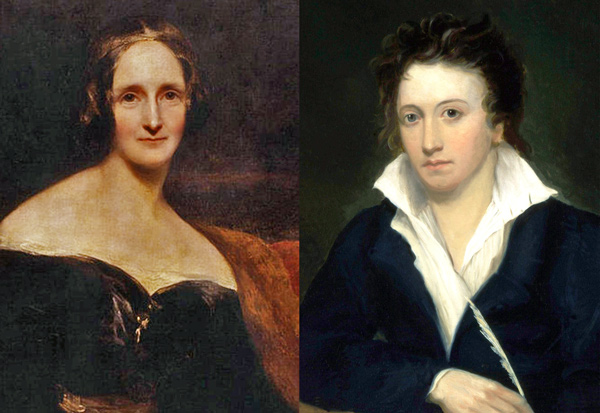 Mary Wollstonecraft Godwin (1797-1851) — Percy Bysshe Shelley (1792–1822). Shelley has taken away the seventeen-year-old girl from the parental house secretly. And three years earlier he has already done it with the first wife Garriyet, seventeen-year-old too. However, this second “civil” marriage was stronger — and has lasted seven years, to the death of the 30-year-old poet. Brilliantly educated daughter of the famous philosopher, young Mary has managed to become not only a muse and the girlfriend on poetic feasts of the romantic poet, but also the worthy partner behind a desk. In 1818 the close company from young people, but already famous poets Byron and Shelley and their even more young girlfriends which was carrying out rainy summer in a country house on Lake Geneva has decided to write according to “the scary story” one night. But only Mary Shelley's work could go beyond a house joke. It carried the name “The Released Prometheus, or Frankenstein's Monster”. 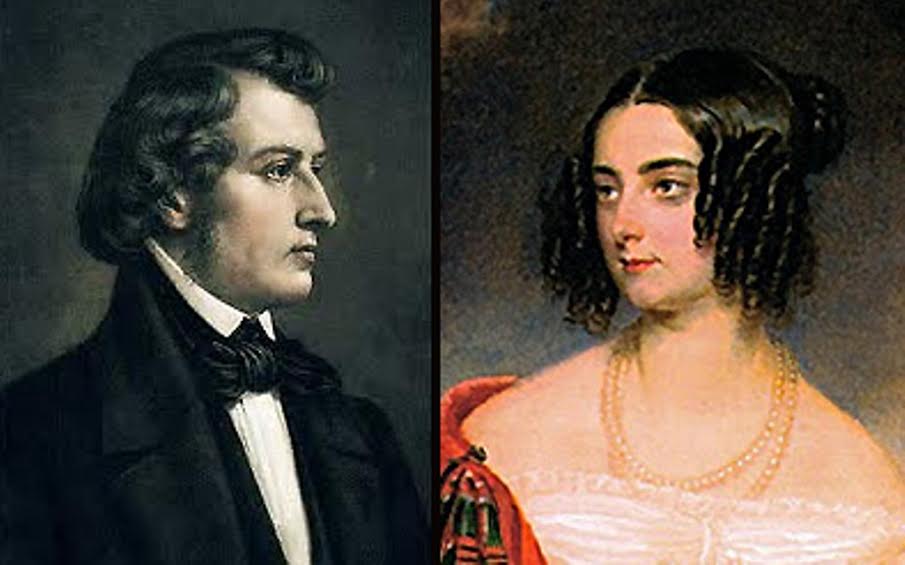 George Sand (Aurora Dupin, 1804–1876) — Frederic Chopin (1810-1849) the Liberated and incredibly active Aurora Dupin was model European “flapper”, on the account of whom not only a set of fine novels, but also a set of loud novels in other sense. But her joint life with the melancholic Polish-French virtuoso has lasted most longer — ten years (1837–1847). Both of them were the brightest artists, and at the same time — the complete antitheses on temperament. Perhaps, it also gave them the chance to be together. In their union Aurora, more senior and “firm”, was a leader: when at Chopin the pulmonary illness has found, it has taken away him to dry and hot Majorca at once, further they spent in the south of France, in a manor of the writer much time. Both there, and both of them worked much, leading mainly a nocturnalism — in it their tastes coincided. Having left George Sand, Chopin has gone to crude London — and his travel was for him fatal. 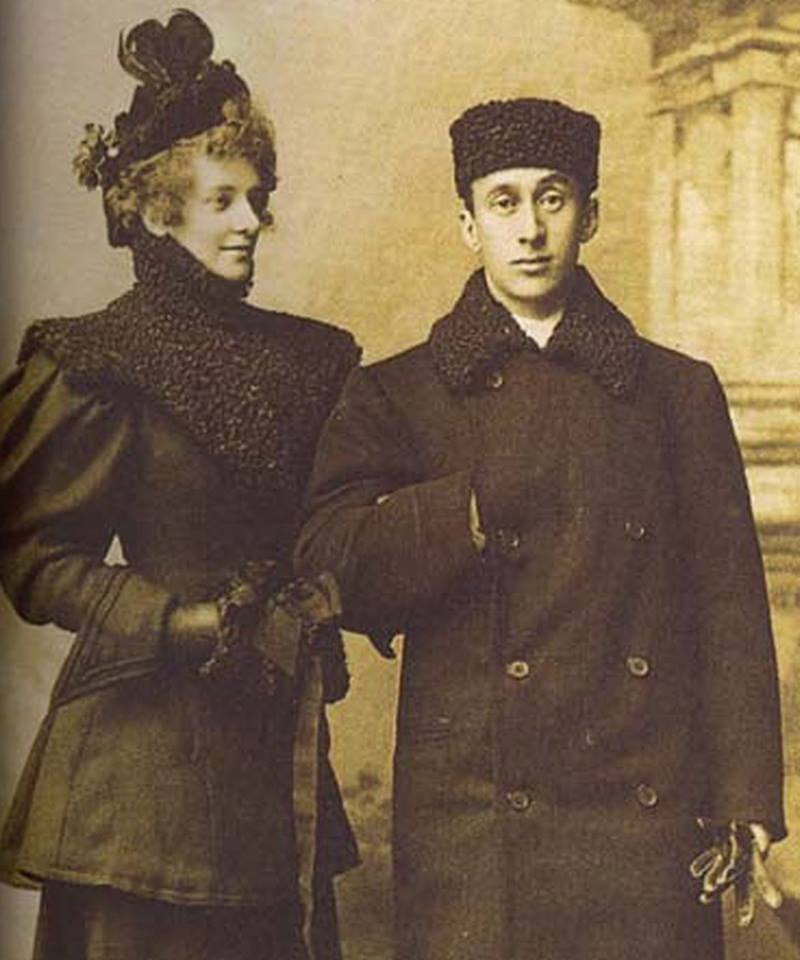 Zinaida Gippius (1869-1945) — Dmitry Merezhkovsky (1866-1941) Unlike above-mentioned, Gippius and Merezhkovsky honor on honor have been married in church (in 1889) — otherwise in patriarchal Russia them just wouldn't allow to live together. But cast in this family house was far from patriarchal. Not to go now into subtleties of mystical philosophy of “the third precept” and repeatedly already described features of the decadent relation to “floor questions”, we will remind only that, according to many acute people who had an opportunity to observe spouses close, their gender roles have been turned. Zinaida embodied the “impregnating” beginning, and Dmitry “bore”, that is embodied his literary and artistic concepts. Gippius, however, said and emphasized that they are “two bodies of one soul” that in fifty years of marriage they didn't leave each other even for one day. 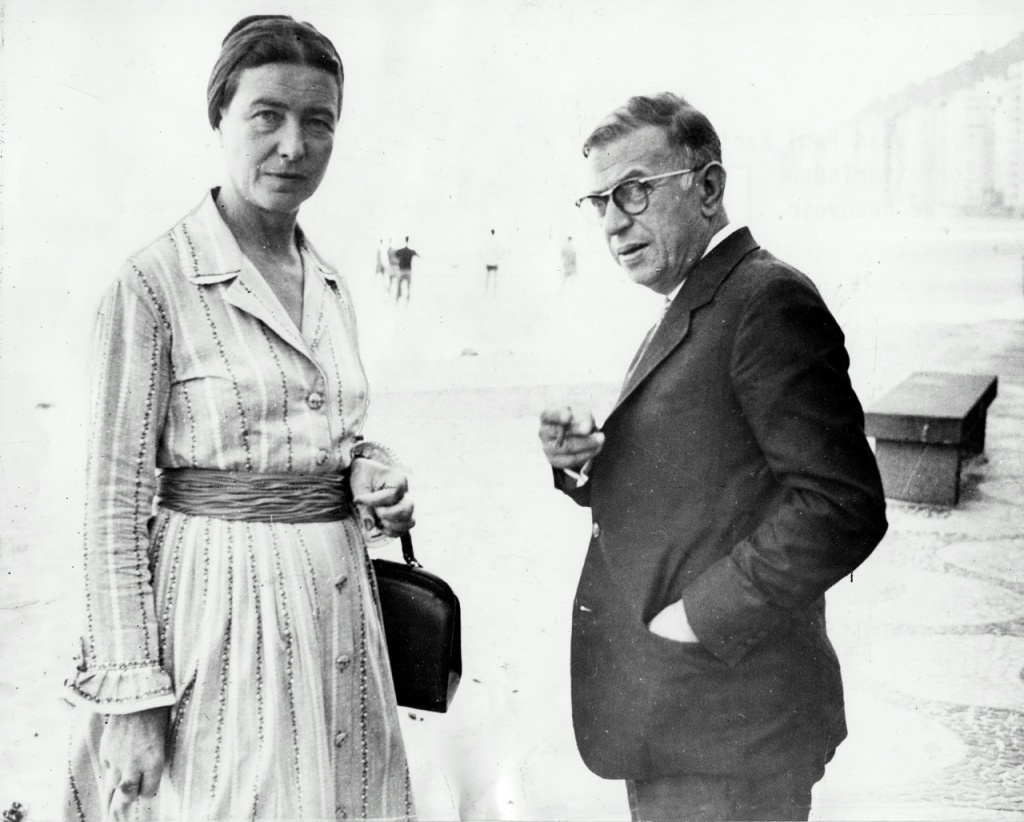 Simona de Beauvoir (1908-1989) — Jean Paul Sartre (1905-1980) Simona de Beauvoir — it is possible to tell, same exemplary “emancipe” of XX centuries as George Sand —of XIX centuries. But possibilities of demonstration of the radical views during an era of mass media have also extended as technical capabilities have extended. Having met (in every sense) in 1929 in elite “Ekol Normal” in which they have passed final examinations, respectively, as the first and second pupils, Jean Paul and Simona, first, weren't going to marry, and secondly, and didn't think to refuse numerous “carnal” novels (in case of Simona — both hetero - and homosexual), at times enough long that couldn't shake their strong intellectual union at all. To which many — but very few people managed tried to imitate, it is similar to de Beauvoir and to Sartre, to sustain up to the end. 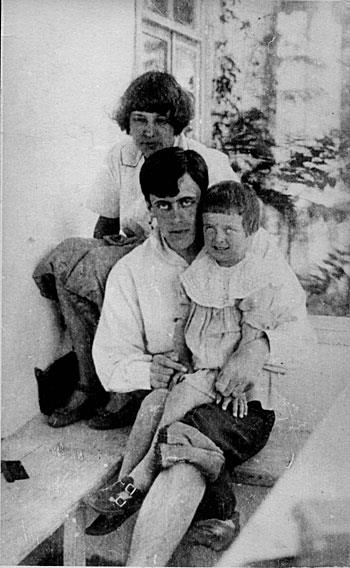 Marina Tsvetaeva (1892-1941) — Sergey Efron (1893-1941) At first sight, early (since January, 1912) Tsvetaeva and Efron's marriage not quite falls under definition of “the creative union”. Sergey wasn't a writer or the artist, and Marina, being already married and having children, has endured a number of the ardent hobbies met by the husband with external indifference. What was promoted also by falsities of the civil war which for a long time has separated them and even more confused circumstances of emigrant life which have led the white officer to cooperation with the Soviet counterintelligence and the compelled return both of them in the USSR — towards to the end. But Marina Tsvetaeva is not just ardent person, but the ingenious poetess. Tsvetaeva needed such firm husband, the husband sword — accepting her such what she is, and understanding her without unnecessary questions. And therefore in Eternity with her there was him. 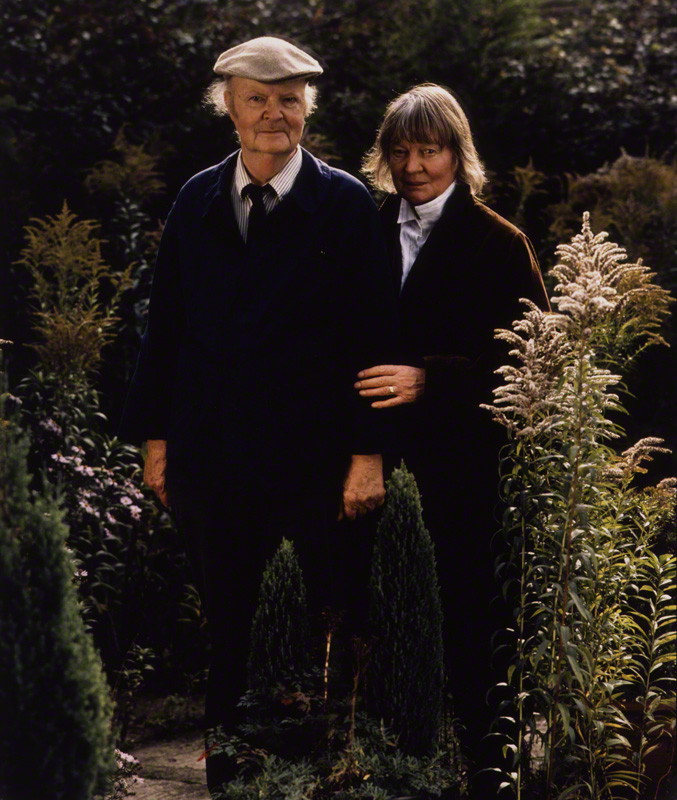 Iris Myordok (1919-1999) — John Bailey (1925-2015) On nonrandom coincidence, the first published Myordok's book became not one of the novels which have glorified her subsequently, and the scientific article “Sartre — the romantic rationalist”. And in three years, in 1956, the 37-year-old writer and the teacher of philosophy who has already endured heavy personal tragedy (the beloved has died at her on hands), has married the younger colleague — the same Oxford professor. Unlike Gippius and Merezhkovsky's mystical union, it was rather comfortable and correct “marriage friendship”: to two professionals from literature was what to discuss — and children, in view of their absence, didn't distract from intellectual disputes of spouses. When in two years prior to death at Iris Alzheimer's disease symptoms have clearly appeared, John has begun to keep the diary. Which after death of the heroine became the book “he Iris: memories of Iris Myordok”. In 2001 the book has been picturized, and both featured actresses, Keith Winslet and Judee Dench, have been nominated on “Oscar”. 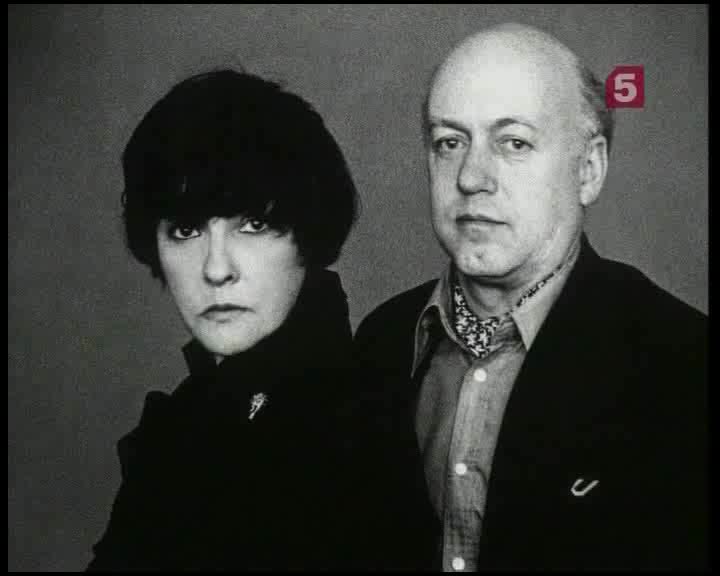 Bella Akhmadullina (1937-2010) — Boris Messerer (river of 1933) the Daughter of the Soviet deputy minister, the beauty, the passionate lyric poet, Akhmadullina has found the “real” husband, to put it mildly, not from the first attempt and not in the first youth — in 1974. But after that at once it became clear — the native of the well-known artistic clan (in particular, the cousin of Maya Plisetskaya) Boris Messerer is him. Who each other, than the poetess with a regal bearing and a tragic voice and the theatrical artist will better add? 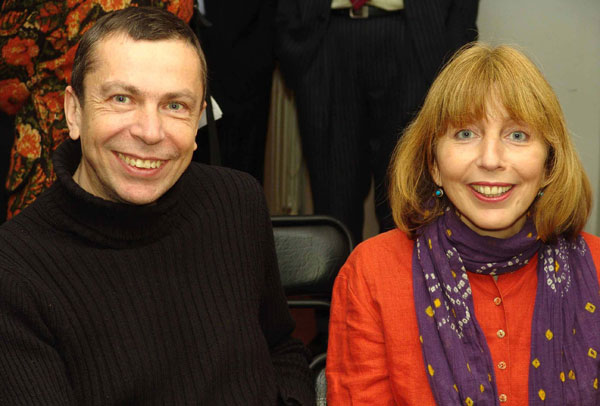 Marina Moskvina (was born in 1954) — Leonid Tishkov (was born in 1953). To write about the well-known people not really is dexterous, especially during an era of social networks when all on a look, but several exceptions after all it is possible to make. The journalist, the writer, the leader of a children's creative workshop Marina Moskvina not only publishes books in registration of the husband artist, but also sometimes does it and himself by heroes of own books. In particular — the book travel “The Road on Anapurna” in which ironically and at the same time very light-history of ascension two very complementing each other of people on top in the Himalayas is stated. Moskvina and Tishkov's son, Sergey Tishkov, appears in these books too — and he the person too not alien to book publishing, but it is already other history. 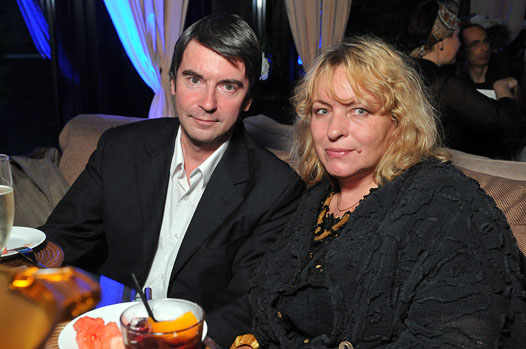 Tatyana Moskvina (was born in 1958) — Sergey Sholokhov (was born in 1958). The Petersburger Tatyana Moskvina — not only not the relative, but also the complete antithesis to the Moscow citizen Marina Moskvina in everything, except one: both of them married not just to “good”, but creative people. Sergey Sholokhov is memorable now first of all as the creator of a meme “Lenin — a mushroom”, but Tatyana has made out in is mute “something” long before these five minutes of fame of the witty St. Petersburg TV reporter with the Candidate degree on art criticism. Here is how she describes it in tragicomic memoirs “Life of the Soviet Girl”: — You are Sholokhov? — I have asked the graceful young man in a black raincoat, with small short moustaches and a crafty smile. — I am Sholokhov — he answered kindly. — Well, and what you are Sholokhov? — I have laughed, having made out him is more attentive. — The typical bachelor from Salamanca. Here such gadded on roads of Spain at the time of Cervantes and fooled the population … So, my acquaintance with absolutely has taken place and it is finished by not Soviet person who in six years will become my husband. I can swear: at the time of acquaintance I haven't felt any rustle covered also songs of destiny. The young man has seemed to me very young, is much younger than twenty four years, polite, and extremely nice. Nothing more. 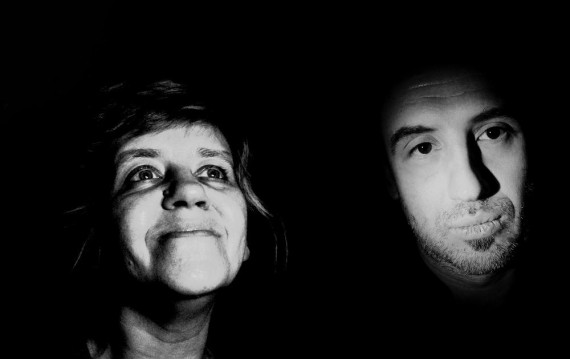 Max Frei (Svetlana Martynchik, was born in 1965) — Igor Styopin (was born in 1967) As Martynchik repeatedly explained, all adventures of sir Max Frei are written by her — but inspired by Igor. “Yes, texts are written by me, everything, but I have a personal demiurge, I was lucky — Martynchik soon after disclosure of a pseudonym in 2001 explained. — And all worlds which are described there, they not only from my images sleepy are weaved. These worlds have a creator — Goshka who even appeared in the beginning under a copyright badge as the coauthor”. So, one may say, contrary to Merezhkovsky and Gippius, in case of Max Frei “gender” roles quite correspond to “biological”. Whether in it the secret of his success is covered?